The guests arrived at Võru Kreutzwaldi Kool by 8.30. They were greeted by the host school's students of form 4b by a Welcome! concert. The students had prepared songs both in Estonian and English and a small play about travelling and friendship. It was titled " Room on the Broom". 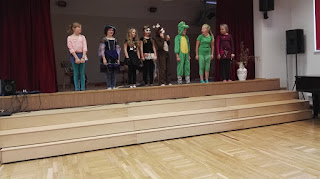 After the concert, I, the Mother Bee, handed out my lovely little Bee-C bees to all the partners so they can fly to their countries and get really busy with doing the project activities.

The hosts showed us around the school and we also got to meet some students. Then it was time to head off to the lessons as it is our aim to get an overview of the possibilities available in the partner schools as well as share good teaching practices amongst ourselves. The first lesson we attended was an IT lesson for second graders. They were learning programming with a program called Scratch. They all created lovely little ladybugs and were taught how to program it to make it move. All of them did such a lovely job and everyone enjoyed the lesson very much. 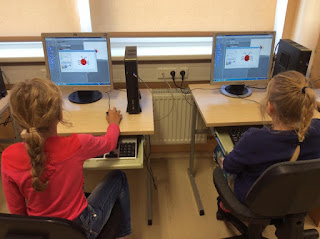 After the break we headed to the Nature Science lesson with form 4 students. The topic was reptiles and the teacher used e-materials available on a special memory stick. It contained texts, videos, listening exercises and active study tasks. Having such ready-made materials available from publishing companies definitely makes the teachers life easier and classes more interesting for the kids. 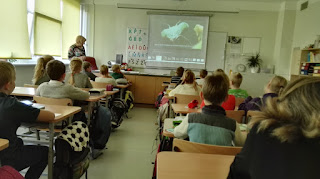 All the guests got to have some lunch at school with Estonian students. All Estonian students get warm freshly made food every day. Up to year nine (end of compulsory education) the food is paid for by the local municipality.

After lunch the partners visited the Town Council where they were greeted by the deputy mayor Sixten Sild. Within an hour the guests were given an introduction to Võru's history, education system and discussed other topics of interest. The visit ended with taking of a group photo. 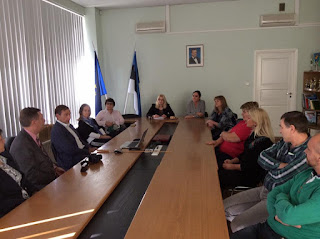 Then the guests were taken on a short tour of the town during which they were shown the two churches (one protestant and the other Russian orthodox one), the brand new state gymnasium (ministry-run upper-secondary school), taken on a stroll along the Catherine the Great Alley promenade (dedicated to the Empress of Russia who signed the documents that established the town)and the beach promenade next to Lake Tamula and through the park dedicated to Friedrich Reinhold Kreutzwald (the author of the national epic of Estonia and the name sake of the Estonian school). 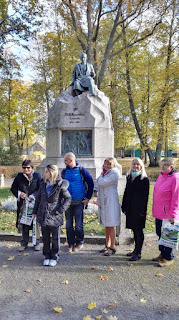 In the afternoon all the partners gathered to the work meeting. There was a lot to discuss starting with the general info about the project up to putting down exact responsibilities and tasks and deadlines for the first project year.


Finally, the meeting had to be broken up to carry on with the planned cukture night. All the partners had brought along some food and music from their country. The Estonians offered a freshly made (by Maiu'as mum) barley and potato porridge with crisp bacon crumbs, some stilk warm rhy bread, elk saussage  and Baltic herring sandwiches. What an interesting and rich feast! Everyone had a lovely time and could relax after along day of work
Posted by Blog Master at 13:30